Get to know some of the world’s top programmers. 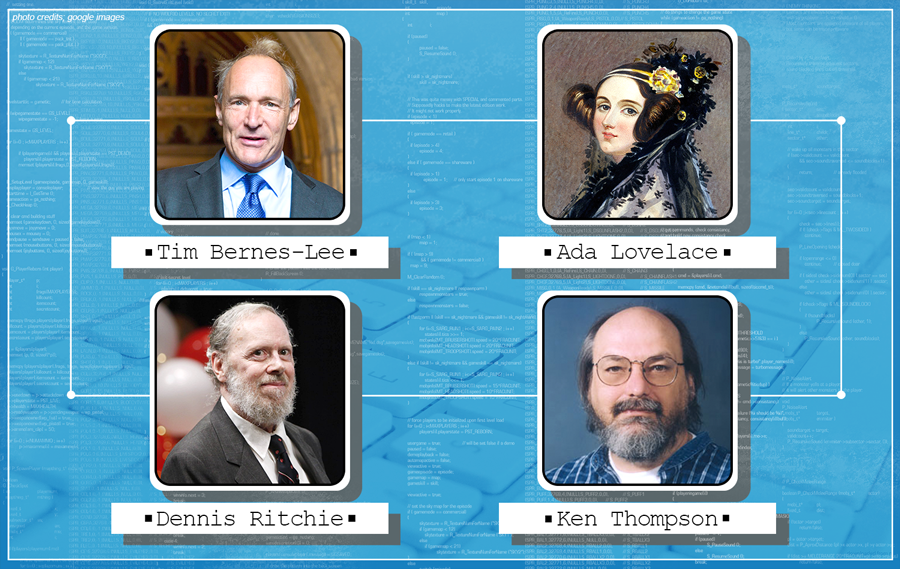 Since the invention of programming, this skill has come a long and tortuous way. The job has started many changes in our lives and has been one of the most lucrative careers in recent years. Despite the large community of programmers, only a handful of them has gone beyond what a programmer usually does in the entire life. They have broken down previous boundaries and created new ways for programming to thrive. Without further ado, here are some of these world’s top programmers. To get familiar with them, join SOJECT.

The world’s first programmer who is also one of the world’s top programmers was a mathematician named Ada Lovelace. This British woman worked on Charles Babbage’s early mechanical computer. Ada was a talented and extraordinary girl from the beginning. She believed that one-day, computers would go beyond merely crunching numbers. Her inspiration in life was her father, who helped her along this path. She was born in 1815 and died in 1852, at the age of 36.

Alan Turing was the mathematician and cryptographer who invented the Turing machine in 1936. The device was used to calculating algorithms based on predefined instructions. Turing machine is the prototype of today’s digital computers.

Unfortunately, at the age of 41, this world’s top programmers committed suicide with a poisonous apple.

Grace Murray Hopper is a New York mathematician known as the first lady of software and the first instructor of computer programming.

Grace Hopper invented the first programming language for the Mark I and Uniquak I computers in the 1950s and built the first compiler.

She is known as a woman who pioneered the COBOL language design and development project alongside Charles Philips.

This figure, who was one of the world’s top programmers, was the first woman to receive a doctorate in mathematics from Yale University and was the oldest officer in the US Navy.

Sir Timothy John Berners-Lee (born 8 June 1955 in London) is a British computer scientist, professor at MIT University, professor and researcher at the University of Southampton, and chairman of the World Wide Web Consortium.

Sir Timothy John Berners-L is an Oxford University graduate and inventor of the World Wide Web.

According to Tim Berners-Lee, the internet reflects human reality, in all its beauty and ugliness, and is so essential that it should be considered a human right.

One of the world’s top programmer, the inventor of C programming language: Dennis MacAlistair Ritchie

Dennis MacAlistair Ritchie (September 9, 1941 – October 12, 2011) was an American computer scientist. He is the inventor of the C programming language. His contributions to the development of the Unix operating system, in partnership with Ken Thompson, is another highlight of his career.

Ritchie and Thompson won the ACM A.M. Turing Award (Nobel Prize of Computing) in 1983. They also received IEEE Richard W. Hamming Medal in 1990 and the National Medal of Technology and Innovation in 1999 from President Clinton.

When Ritchie retired in 2007, he was the head of Lucent Technologies System Software Research Department. He is said to have played a significant role in shaping the digital age. Ritchie, known among hackers by his famous username, dmr.

This world’s top programmer’s main achievement is the design of the Linux operating system, which, in addition to personal computers, runs on hundreds of supercomputers and countless servers, including Google, Amazon, and Facebook.

What primarily motivated Linus Torvalds to become a programmer was his inability to afford a version of the Unix operating system.

During the Linux conference in September 2013, Torvalds was asked if government agencies had asked him to insert a “back-door” into Linux. He uttered the word “no,” as he nodded his head.

In a Time magazine poll in the year 2000, he was ranked 17th. 9793 Torvalds Asteroid is named in honor of this expert and to thank him for his achievements.

This prominent Danish-born computer scientist and researcher who was a top programmer worldwide became best known for creating and developing the C ++ language.

The founder of Microsoft: Bill Gates

You probably know a lot about him. He dropped out of Harvard and, in 1975, co-founded Microsoft with Paul Allen. Until March 2017, he was known as the richest man globally with a net worth of $ 86 billion.

One of Ken Thompson’s famous quotes is:

“You can’t trust code that you did not totally create yourself.”

Kernighan, along with Ritchie and Thompson, co-developed the Unix. Other achievements include designing the AWK and AMPL programming languages and compiling the first C guide with Ritchie.

He has some beliefs, among which we mention the following:

This computer specialist, who was one of the world’s top programmer, led the FORTRAN interpreter programming language development team. He also coined the Backus-Naur form, which is used to describe the composition of a language and the presentation of data formats. In an interview with IBM Staff Magazine, he described much of his work as the result of his laziness.

Gosling succeeded in designing Java when he worked for Sun Microsystems, and today he is known as the father of the programming language. He has also been involved in other successful projects, including NeWS and the Gosling Emacs software system. His main motto for Java was “Write once, run everywhere.”

SOJECT and Programming your software projects

Although Bill Gates, James Gosling, Bjarne Stroustrup, and the rest of the world’s top programmers are not currently working in SOJECY!!!, we try to make your demanded software and applications of the highest quality. Our company is composed of many experienced programmers in various fields who can provide quality services across multiple software applications.

For more information, you can contact us through this site

Ive been meaning to publish about something like this on my website and this gave me an idea. Exactly the stuff I needed.

Thanks for a nice share you have given to us with such an large collection of information. Great work you have done by sharing them to all. Simply superb.