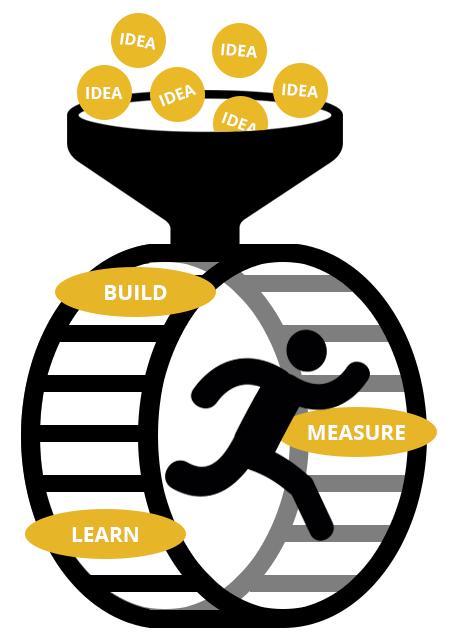 The previous article discussed Lean Startup’s concept, a new approach to starting a software business that saves the programmer’s time and money. This method is based on producing the product in several stages, align with the user’s taste.

Following Lean Startup’s topic, we will point out this method’s fundamental principles and benefits.

First, instead of wasting time on months of planning and research, entrepreneurs admit that they are initially faced with a set of untested hypotheses and essentially good guesses. So, instead of writing a complicated business plan, the idea owners summarize their notions in a business model canvas framework. This model is generally a diagram of how to create value for the organization and its customers.

Second, Lean Startup uses the “Get Out of the Company” approach, a program to get users’ feedback and develop ideas. This helps startups to test their hypotheses in the real world. Programmers or Idea owners come out of their imaginary world and get feedback from potential customers, users, and business partners on all aspects of their software, including product features, pricing methods, and cost-effective purchasing strategies.

Adapt quickly to your users’ needs

Third, Lean Startup incorporates something called agile development, which first emerged in the software industry. Agile development works synergistically with customer development.  In contrast to the usual annual product cycles, which cover the anticipation of customer problems, this method, reduces waste of time and resources by repetition and gradual software development. The product of this process is the Minimum viable product (MVP).

When Jorge Heraud and Lee Redden started their Blue River Technology startup, they had a plan to build a lawnmower for commercial spaces. To do this, they talked to a large number of potential customers. After several weeks, they realized that their design was not suitable for industrial lawn mowing.

After that, they talked to the farmers and found one of their main difficulties is weeding without chemical pesticides. To fill this gap, they focused on producing a new product and building a prototype.  Their initial product received so much attention that nine months later, more than $ 3 million was invested in their startup.

The silent activity has now lost its popularity. Lean Startup has transformed the concepts of the business world, including software building. During the Dot-com bubble, startups often operated in a “stealth mode” (to avoid alerting potential market competitors). The prototype was only available to customers when the programmers performed many beta tests. The Lean Startup method has obsolete these concepts because it believes that customer feedback is more important than confidentiality in most industries, and consistent feedback provides better results than anticipated.

You’re closer to your customers:

There is a distance between you and your customers in the business plan based software production process. The software developers live in their imaginary pursuit, the world that there is no way out for end users.

But Lean’s method helps you know what you will encounter later before producing the software. Lean’s approach enables you to get very close to customers. The first, middle, and last part of the lean are the customers.

You must have heard that defeat is the prelude to victory. But if this defeat happens late, it is may no longer a prelude to success.

In classical software development methods, meeting with real customers occurs after forecasting, investing, and producing the final product. It is tough to accept failure after such an exhausting journey.

But if you are going to fail, Lean Startup helps you accelerate failures. That way, you will have plenty of time for future defeats and victories. The faster loss means less capital, time, effort, and motivation wastes.

You can quickly turn the steering wheel.

The production of software or any other product occurs gradually in the Lean method. At each stage, you make the necessary changes based on the customer’s judgment. In contrast, if you make the software in one step, you have no choice but to convince the customer: to persuade them that your product is exactly what they need. And, of course, experience shows that you will fail in this job.

Lean Startup helps you start, continue, and finish the software in the way the user needs. If you encounter a problem at each step, you can take a step back and turn the steering wheel toward the correct path. The Lean method helps you to ultimately produce software that is of interest and need to end customers.

In the 21st century, the forces of change alter people’s situations in all kinds of organizations and startups. The Lean Startup approach will help you keep up with these rapid changes and manage your business in a completely flexible and changing way.