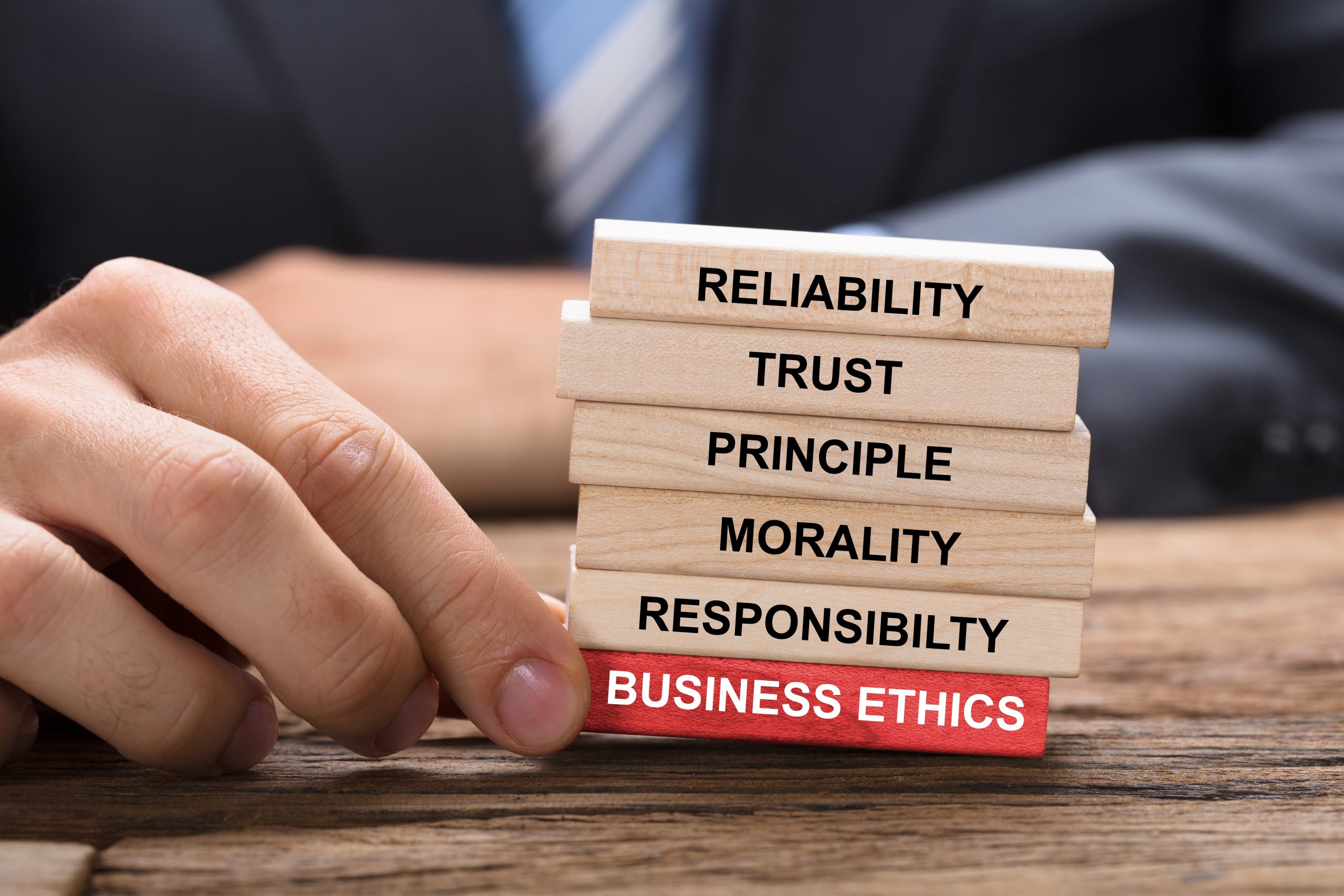 Morality means temperament, habitual behaviour, and attitude. Sometimes it is described as a state or behaviour, and sometimes it refers to systematic knowledge. In the latter application, ethics is a science that discusses good and bad.

Ethics has always been of great importance in human relationships. Also, in management, this internal mechanism can produce behavioural functions without the need for external levers. Ethics has an important and decisive role in actions, behaviours, decisions, choices, and relationships. That is why talking about ethics in business has turned into a major topic in management. Here some ethical management definitions are provided:

Ethics is defined as a system of values and do’s and don’ts that distinguishes bad from the good in an organization.

Ethics is a model of communication that is based on respect for individual rights. In other words, ethics is responsible for the rights of individuals.

Ethics in business has a broad meaning, and various issues are considered as a subset of it. Although law plays a significant role in business ethics, philosophy and science also address this concept.

In addition to staying legally clean, many businesses use business ethics to strengthen their public image. This builds trust between consumers and the companies they serve.

Business ethics examines a company’s behaviour in the face of various situations and challenging conditions. Running a business, trading, stock offering, and relation with customers are some of these situations.

Business ethics is a modern idea in its current sense. However, it has always been the subject of business discussions from the old times.

Aristotle even offered some personal ideas about business ethics.

The Importance of Business Ethics

In today’s societies, both nationally and internationally, trade and economics are the two major driving forces. These two, in combination with new technologies, are increasingly shaping people’s thoughts and behaviours. Every day they enter into more and more different areas of life such as research and development, telecommunications, biotechnology, politics, education, culture. They also strongly influence religion and family.

Regarding the growing influence of trade and the economy, we need to ensure that they are on the right track. Business and the economy must be controlled both externally and internally.

The external approach alone cannot fulfil this guidance; Because it is not from the business’s inner commitment. On the other hand, it is not enough to be convinced with the inner approach. Like any other social sector, business is a part of society and requires additional external control. However, the internal process is more important because economic agents interested in freedom will bear more responsibility.

Expressing the moral dimension within the realm of trade and economics helps them both move in the right direction. In this way, not only moral Practice but also Ethical Theory or Business and Economic Ethics faces uncertain challenges as scientific research. As globalization progresses, the practical and theoretical challenges in this area become more and more complex. Looking at this great goal, the practical and theoretical achievements of business ethics still have significant shortcomings. Some factors have made progress very difficult.

Global Transformations is a book’s title by David Held and his co-authors. The book is a clear and precise picture of globalization, very complex processes that are unlikely to be completed and understood in-depth, and far-reaching consequences for local communities. The business ethics issues relate not only to social relations within society – as John Rawls examines in the book.

“The Law of Peoples” – but also to individual-to-individual relations within multinational institutions across national borders.

Individuals must reach a common and growing Cultural and Religious Pluralism between countries and cultures. They should strive for a common moral field to meet common results.

This common ground could be something like the Global Ethics proposed by the World Parliament of Religions in 1993. Hans Gang, along with others, developed and promoted it.

The rapid technological changes have paved the way for developing international businesses. So, it seems wise for business ethics to follow a global approach.

Although valuable approaches have been developed in various cultures and countries as far as possible, all have failed to provide a process for globalizing business ethics.

The first World Congress on Business, Economics, and Ethics was held in Tokyo in 1999. The congress provided a list of questions that needed to be addressed as the major challenges in universal business ethics. The results and achievements in this congress were published in a special issue of the Journal of Business Ethics in October 1997 as a conceptual framework.

Therefore, this article will define the conceptual framework for business ethics. The next step will discuss the different approaches to “business ethics.”

Why a Conceptual Framework?

A conceptual framework is characterized by a few features. It is called a framework because it is neither a full-length mirror of the subject in question nor a general and vague outline of it in a pervasive sense. It includes all the essential elements, relationships, and links of the subject under study. The framework is consistent and can be applied to theoretical approaches, and covers a wide range of details. Of course, it also includes many theoretical concepts such as the relationship between theory and experience. The philosophical basis of economics, the moral dignity of economic institutions, and people’s ideas about the relationship between body and soul are other issues. However, the discussion goes beyond the limited scope of this article.

In this article, the term “Business Ethics” or “Business and Economy Ethics” is used in a broad sense and includes all economic spheres of life.

How Is Business Ethics Defined in USA and Europe?

Business ethics in the United States is more concerned with micro and individual issues, while the main emphasis in German-speaking countries (and continental Europe) is at the macro and systemic level. In addition, North America addresses a number of basic and growing intermediate issues at the organizational level and rarely discusses macro-issues. By comparison, the Germans are just beginning to get into mid-level discussions at the organizational level.

The American approach emphasizes the use of the freedom domain and the proportionate responsibilities of decision-making and behaviour with a tendency to ignore their limitations. The German approach, on the other hand, emphasizes the importance of the business progress that must be performed under moral responsibility and is reluctant to make full use of the existing scope of freedom.

The American approach is much more pragmatic, at least at the micro and intermediate levels. European continents, on the other hand, tend to focus on theoretical issues before considering practical challenges.

University centres in North America must look for grammatical issues in clearer, more open, and direct ways than the Germans’ field.

At the macro level, the focus is on the economic system (or economic order). Here are some key features. These features are used not only in closed economies (without international relations) but also in open economies with various types of internal and external relations. According to the common view in the new theory of economic systems, distinguishing an economic system with a single criterion is misleading (such as “capital” as an asset regime or “market” as an allocation regime). Approximately three sets of criteria are required:

Who participates in the economic decision-making process? Who plans and controls production, distribution, and consumption? (E.g., a strong focus on economic power or a broad participatory economy);

With the help of which information system are people’s decisions coordinated? (For example, with decentralized markets or with centralized planning).

What are the goals of different decision-makers? (For example, self-interest, public goods, honesty, and loyalty) Which way is chosen to implement decisions, and what kind of behaviour is expected?

Only if all three of these criteria are applied in a balanced way an economic system (say, “foreign” or “globalization”) can be sufficiently recognized and evaluated ethically.

The final view refers to the role of the economic system (macro-level) and its relationship with other economic factors in the organization (intermediate level) and individual levels (micro-level). If it is assumed that the economic system completely determines all factors and activities in the realm of economics, there is no need to pay attention to the middle and micro levels. However, if it is assumed here that there is a more or less extended scope of freedom at all levels, the agents have a relative autonomy and are similarly responsible. Of course, this does not diminish the importance of the macro-level because this level is where the major institutions (a distinct title from organizations and the rules of the economic game) are determined and consolidated.

The formulation of organizational ethics strategy is new in terms of the history of ethics. Therefore, we need more efforts to achieve a good foundation and a balanced view. Some theories (such as virtue-oriented ethics) focus more on individuals in a company than on the company itself or do not clearly distinguish between the micro and intermediate levels. Although relatively well formulated at the intermediate level, other theories (such as Kant’s view and the theory of social contracts) seem to have a little basic at the system level. In contrast, other theories (such as discourse ethics) with strong foundations do not seem to address organizational issues sufficiently and only a handful of theories explicitly address the international dimension.